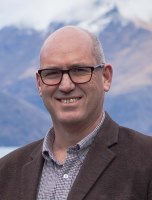 Richard Lauder has held chief executive positions at six successful companies over a 27-year career in tourism, manufacturing, aviation and infrastructure. Since joining Real Journeys in 2012, he has tripled the size of the company and recently restructured it to become Chief Executive of Wayfare, a company that owns and has oversight of some of New Zealand’s most loved tourism brands: Cardrona Alpine Resort, Go Orange, International Antarctic Centre, Canyon Food & Brew Co, as well as Real Journeys.  Combined, the group hosts about 1.6 million guests each year and employs around 1500 staff during peak periods.

Richard is a Chartered Member of the Institute of Directors and has served as a director on the boards of a number of industry organisations (TIA since 2014) and private companies. He currently holds the chairmanship of both TIA and the Wakatipu High School Foundation. He was appointed TIA Chair in September 2018.